Yes, the Cooking Dude uses his microwave oven. Microwave ovens are not just handy things for people who don’t know how to cook. Experienced cooks use them as well. But there are also things I don’t use it for.

Some dishware is microwave safe and some is not. If it’s safe to use, it usually says so on the bottom of the plate; something like “dishwasher and microwave safe”.

Microwave energy is absorbed by conductors; the idea is that it heats the water in the food, and therefore also the food. But metal things will absorb the energy and make it unavailable for the food. And can also damage the microwave oven.

In seconds, you can transform a beautiful dinner plate with a gold rim into an ordinary cheap plate. And the gold will have been deposited on the inside of the oven in a film only a few atoms thick. The wonder of it all. And it’s not likely to increase the value of your oven.

Microwave ovens have come to have a wide variety of controls; some of them even have buttons labeled “Popcorn”, “Soup”, “Defrost”, and so forth. You should make it a point of reading the manual covering your microwave oven, so you’ll know how to (and how not to) use it. I’m just going to tell you to turn it on High for 20 seconds; you’ll have to figure out how to do that on your own oven.

Now, there are three basic things the miraculous microwave can do for you (other than destroy dinnerware): reheat or warm food, thaw frozen food, and cook food.

The microwave energy is not uniformly distributed throughout the interior of the oven. Despite lots of engineering effort, and rotating blades to reflect the waves around in the oven, there are still places in the oven that have more or less energy than others.

Because of this, you need to stir the food now and then, or place it on a rotating turntable, or both. It also helps to use a plastic cover over dishes or paper plates to contain the steam and help make the heating more uniform.

Personally, I never use the microwave to thaw frozen food, because of the non-uniformity of the microwave energy inside the oven. It’s easy to get warm spots, or even cooked spots, in the food while it’s still frozen in other places. I recommend thawing food in the fridge, if you have time, or in a sink full of water, where you can use a zip lock bag to keep the food dry, and turn it over once in a while.

Appetizer Let’s start by warming something. The photo shows a salami, cheese, and cracker appetizer. For the lesson, you don’t need the salami, but I would like you to use the microwave to melt the cheese on the crackers. 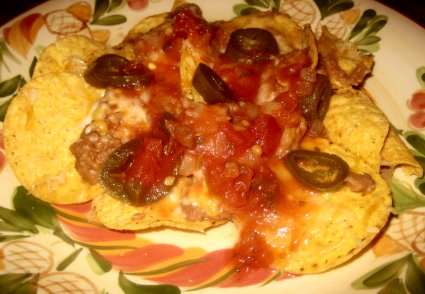 Arrange the crackers around a microwave-safe plate or on a paper plate. Put a slice of cheese on each one, and put the plate in the microwave. Turn it on, and watch the cheese closely. Here is a visual demonstration of how non-uniform the heating is. Some slices will develop melted and bubbly areas while others look the same as when you put them in. This is why, even if they are on a turntable, you need to push the stop button, rearrange the food, and re-start it.

Depending on the power of your oven, it may only take from five to fifteen seconds to melt the cheese. This is also how you might make nachos for a snack. You can warm leftovers the same way. If you warm the same thing often enough, like heating up a cup of coffee, you will learn, for example, that it takes 90 seconds for the coffee to be steaming hot. But until you learn from experience, keep your eye on the food.

Cooking food is another story. There are things, for example, that I don’t ever cook in the microwave. For example, I’ve experimented with eggs. NEVER put a whole egg in the microwave. After it explodes, you’ll either spend hours cleaning it up, or shopping for a new oven. Also, never crack an egg into a cup and put it in the microwave that way. The yolk will probably explode with the same result.

You can stir the egg, nuke it a few seconds, stir it, nuke it, stir it, and what the heck, by now I could have done it on the stove. Plus, egg cooked on a cup or dish in the microwave seems unusually hard to clean off. I think the microwaves polymerize the nuclear strands in the molecules of the peptides causing the formation of epoxy. OK, I made that up.

I also never cook meat, for two reasons. One is the difficulty of uniform cooking, and the other is that, to me, the meat acquires a different taste that I don’t like. So what do I nuke? Mainly vegetables.

The microwave does a great job on veggies, probably because they are normally cooked with a little water in the bottom of the bowl, cooking them partly by steam and partly by microwave energy. We’re going to nuke a spud now.

Potatoes Using a sponge or brush, scrub the potatoes under the faucet water removing the beautiful dirt from Idaho that comes along as a gift. Set aside one of the spuds for later. Peel the other potato if you want, but peeled or not, cut it into golf ball sized chunks.

Put the potato chunks in the Pyrex bowl, add a little water (maybe 1/4 cup), and put on the cover. Place the bowl in the microwave and set it on High for three minutes. After three minutes, using pot holders or mitts, take the bowl out of the microwave, remove the cover (watch out for the steam), and stir the spuds around. Poke them with a knife to test their doneness. Some pieces will be more cooked than the others, which is why you stir them. 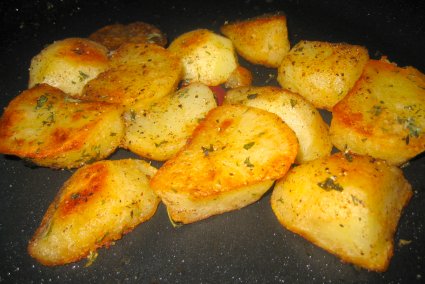 After a total of five minutes or so, the potato will be done. Drain the water out of the bottom of the bowl. Now you have several options. You can add butter, salt, and pepper, and eat them as is, like boiled potatoes. You can brown them in a skillet. You can make potato salad. You can throw them away. Whatever, continue with the lesson. 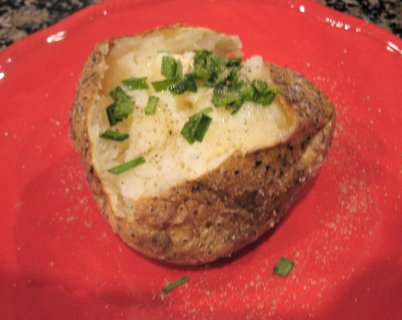 Take the other spud and put it on a microwaveable or paper plate. Use the tip of a knife or the tines of a fork, and poke a few holes in all sides of the spud. Put it in the microwave on High for a couple of minutes, and turn the oven off (usually just by opening the door) and gently squeeze the potato. At this point it should still be hard. Turn it over, move it to a different part of the plate, and nuke it for another couple of minutes. Repeat the test.

When the potato feels soft, it’s done. Remove it from the oven, slit it open, and voila! you have a baked potato. Now you can dress it up however you like: butter, salt, pepper, sour cream, bacon bits, chives, sunflower seeds, peanut butter, you name it. It’s all yummy.

Now you can use your microwave for more than just popcorn. Warm up leftovers, fix appetizers, and make potatoes to go with your meal (or as a snack). Now try cooking zucchini like you did the steamed potatoes. See? Easy! Now all of a sudden fresh veggies are the easiest thing for you to fix. And while you’re at it, you’ll probably invent some neat appetizers, also.