Boiling Water (and Eggs) — Lesson One

For this cooking lesson on boiling eggs, you need a medium sauce pan, a stove, a timer, clock, or watch, and some eggs. Oh, and water.

Start by placing the eggs gently into the pan, and filling the pan with enough cold water to cover the eggs. Put the pan on the stove.

You’ve either got an electric range or a gas one. The primary difference is that the electric eye takes longer to heat up than the flame, and when you turn it off, it stays hot for some time. So it’s more difficult to control, and you have to plan ahead by turning it down sooner, or waiting longer for it to heat up. To stop something cooking, you need to move the pan off of the hot eye. For these reasons, gas is generally preferred by cooks. But we don’t always have a choice, so we’ll learn with what we’ve got.

You can learn to be a good cook either way. 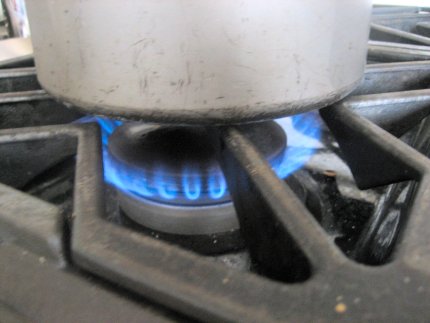 OK, so now the pan with water and eggs is on the stove. Turn the heat up to medium, which is probably a dial marking. Use the dial markings until you get experience yourself on you own stove. If you have a gas range, you can see the flame, and judge for yourself how high it should be.

If the flame is lapping around the bottom edges of the pot, it’s too high. This will also singe your fingers, which detracts from the cooking experience. 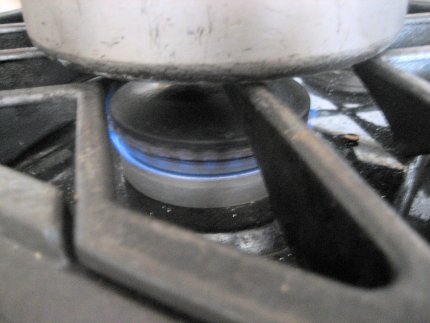 If it’s too low, it will take too long, and you’ll get bored, or have to go to work, or change the baby or something. So we don’t want to waste time with the burner too low. We’ll use the low settings to keep something warm some other time. (You can click on these small photos to see a larger version.)

A medium flame should get the water boiling in about ten minutes. Another reason not to heat it too fast is that you might not want to crack the egg shells yet, and so you should avoid too much thermal shock. That’s why we start with cold water in the first place. 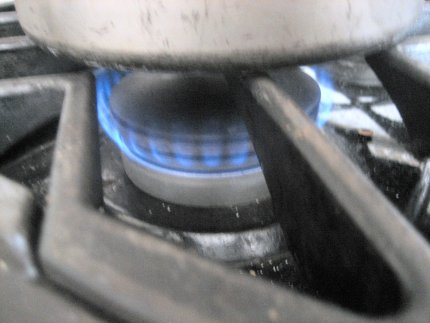 The water will begin to simmer, and then progress within about a minute to a full boil. Watch for the water to have bubbles rising rapidly, and for the surface of the water to be very turbulent. As soon as it reaches this stage, take the pan off the heat, cover it, and set the timer for ten minutes.

During this ten minutes, get out a bowl and fill it with cold water. If you’ve got it, add some ice. 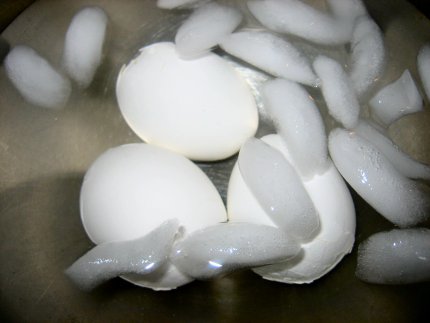 At the end of ten minutes, take the pan to the sink, hold its edge against the side of the sink, and slowly pour the hot water out of the pan. Try to keep the eggs out of the sink, or worse yet, going down the drain. (You’ll have another chance to lose an egg later.)

When the water is out of the pan, shake the pan around a few times so the eggs bang against each other and the sides of the pan. You want to crack the egg shells in several places so the cold water can seep in between the shell and the egg. (You don’t do this step at Easter, if you want beautiful eggs to dye.)

Now dump the cracked eggs in the cold water, and let them sit for at least five minutes. In fact, it won’t hurt to leave them there or put them in the fridge for peeling later if you’re in a hurry.

When it’s time to peel the eggs, hold them under a stream of water from the faucet and pick the shells off of the egg. Sometimes it’s easy, sometimes not. Fresher eggs are more trouble than older eggs. But if you’re lucky, the shells will come off pretty easily, without damaging the egg. There is a thin membrane between the shell and the egg, and if you work underneath that membrane it will help separate the shell from the egg. 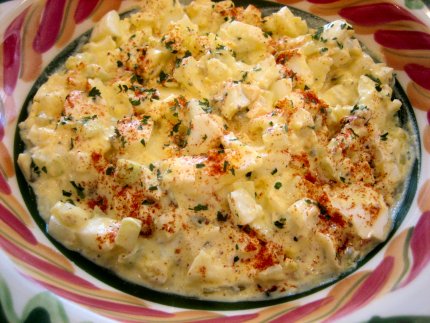 Now you have several choices: you can eat the egg, either sliced or not. I like to sprinkle a little salt and pepper on the egg, or better yet, some Hot Salt. You can also make egg salad, either for a salad or for sandwiches. You can also make deviled eggs, which are always a popular and tasty appetizer. 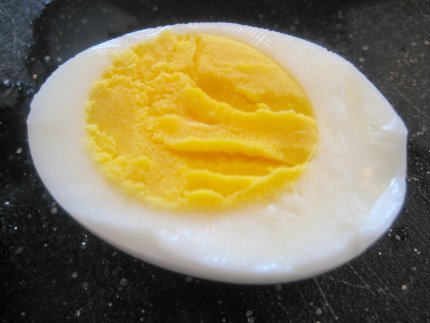 If the egg is properly cooked, the yolk is bright yellow, and not too hard. If it’s underdone, the yolk may have soft spots, in which case you should increase the ten minutes by a few more. This is most likely to happen if you live at a high altitude (like 5,000 feet) where the boiling water isn’t as hot as it is a sea level. (This is also a clue that you will need to increase many cooking and baking times; but most people living at high altitudes already know this. Or they’ll find out.

If the egg is overcooked, it won’t hurt anything, it just isn’t quite as good. The yolk will be paler in color, and may even get a (harmless) green tinge around the edge next to the white. Maybe it sat in the water for more than ten minutes, or maybe it boiled too long before you took it off the heat. Anyhow, it’s still a good egg. Now you know how to make hard boiled eggs. 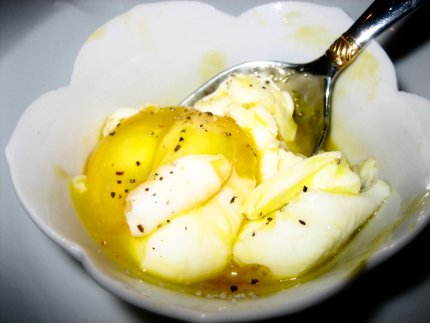 If you want to make a soft boiled egg, follow the same procedure, but set the timer for three minutes. When the time’s up, dump out the hot water, but skip the cold water step. Just hold the egg under the running cold water for a few seconds so it’s not too hot to handle, and then it’s ready to eat. Either crack the egg and scoop the contents into a small bowl, or whack off the small end of the shell and eat it with a spoon right out of the shell. Soft boiled eggs are a nice low calorie way to fix an egg, although some people add a little butter anyway, in addition to some salt and pepper.

To make The Original Caesar Salad, you need a coddled egg. For this, you don’t put the egg in the water until the water’s boiling, and then for only one minute. If the shell cracks it doesn’t matter, because you’re going to break the egg into the salad anyway.

Now you not only know how to boil water, but you can cook eggs. See, you’re already on your way to becoming a Food Dude, thanks to Cooking Dude!