OK, here’s real County Fair Food. And man, is it good! Ranks right up there with the Deep Fried Spam and Twinkies.

These potatoes are a little bit of trouble to get set up for, but it’s worth it. Serve ’em with burgers, steak, or just by themselves. If you want, you can dip them in catsup, ranch dressing, or other sauce, but I’ll bet you’ll like them best just as they are. They keep great as leftovers, either warm or cold. The flavor and crunch is absolutely wonderful.

At the fair, there was this vendor from Australia selling these as fast as they could cook them. The potatoes were sliced into slabs, and they were very large potatoes. For Cooking Dude, I used normal-sized spuds, and also sliced some into wedges like steak fries. The photo shows some of each.

Just as I prefer to pre-boil the potatoes for French Fries and homemade Potato Chips before frying, I do the same here.

There are a lot of ways to dice an onion. That’s not as famous a line as ways to skin a cat, but more appetizing. Onions are usually sliced into rings or wedges, or diced into large or small chunks, depending on their use.

Slicing or dicing onion, celery, and carrot is the first step in many recipes. Sautéing or frying this mixture, called a mirepoix, forms the base for many soups, sauces, and gravies.

Slicing an onion into thin slices and then cutting the slices to form dice can be difficult because the onion is round, and hard to hold on the cutting surface while slicing. Good way to slice yourself. But by cutting it in half first lengthwise, we have a flat surface to put down on the cutting board. So if you don’t actually need rings, this is the way to go.

To dice the onion, we are going to make use of the fact that the layers of the onion itself form one side of the dice. Start by cutting off the ends of the onion. Then place the onion on one of those cut sides, and slice it in half lengthwise. Now you have Eastern and Western hemispheres.

At this point, it is easy to remove the peeling from the two halves. Just grab the first couple of layers and pull the peel off. 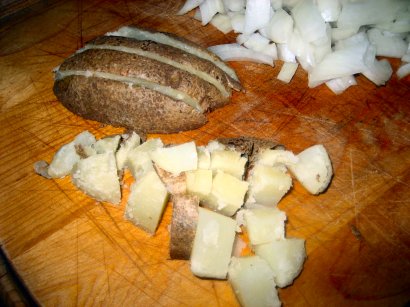 Now lay the half down on its cut side and make five or six more lengthwise cuts, as shown in the photo above. Here you’ve got the onion sliced. Now cutting crosswise will provide a stack of onion, that when crumbled to separate the layers, will be in nearly equal sized pieces.

If you need wedges instead, make four or five additional lengthwise cuts after the first one, and the bottom root end will help hold each wedge together.

Be very careful when slicing the last inch or so of onion, because it’s very easy to get cut. As I say on the Kitchen Safety page, keep your knives sharp, and your fingers out of the way.

On the left is a photo of a potato being diced. Similarly to the onion, I start with a lengthwise cut into halves, then more lengthwise cuts, and then several cross cuts. Now both the onion and the potato are ready to to into, for example, corned beef hash. Yum!