Corn on the Cob

What’s better for a summer barbeque than corn on the cob? And of course, frozen corn on the cob is available year-round in the market. Here’s how to get the best flavor from each.

The photo shows grilled corn out at the barbeque. Some of the ears have just been taken off, and others are about to be put on the grill. Of course if your grill is large enough, you can do them all at once.

First, however, let’s assume you need (or want) to cook the corn indoors. If you have fresh corn, bring a pot of lightly salted water to a boil, and add a spoonful of sugar. Husk and clean the corn, and break into halves if you want.

Add the corn to the boiling water, return to a boil, and turn off the heat. After three minutes, drain the corn. Serve with butter and salt, if you wish, or butter and salt the whole pot at once.

If you are starting with frozen corn, you need to change the method because the cob won’t thaw that fast, and you don’t want to overcook the corn. So in this case, put the corn in the cold seasoned water and then bring to a boil. At that point, it’s done.

You can either take the cooked corn out to the fire for a few minutes to brown it or cook it on the grill from scratch. If you put raw corn on the grill, leave the inner layer of husk on the corn for more even cooking and browning. Just between you and me, you can also “beautify” indoor corn with your butane torch, if you have one. 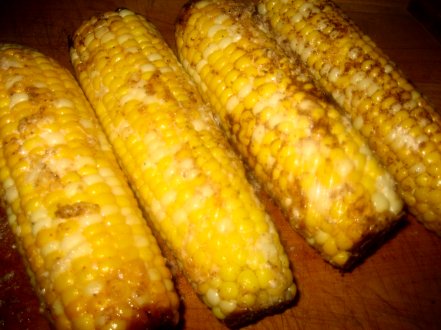 Here’s another Grilled Corn recipe. One of our household members saw this one on TV, but doesn’t remember which show. If I see it on a rerun sometime, I’ll credit the source. Anyhow, we decided to try it, and it was very good.

This is best made with fresh corn, because if it’s frozen the cob won’t have time to thaw unless you thaw it well in advance. 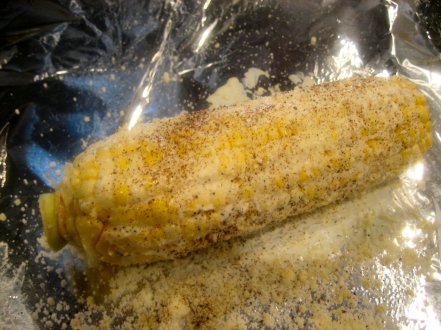 Tear off a rectangular piece of foil, one piece for each ear of corn. Clean off the husks and silks, and coat the cob with mayonnaise. (A small spatula makes this job a little easier.) Then sprinkle the corn with chili powder and Parmesan cheese.

Roll up the corn in the foil, folding the ends over as you go. Put these packets on the grill and turn them every few minutes. After 20 minutes or so, the corn will be cooked, and beginning to brown. Sprinkle them with salt and pepper and serve. The chili powder did not make the corn very hot, but it added great flavor. If you want it hotter, just add some extra black or red pepper.