These tiny cabbages are not only good but good for you. But a lot of people don’t know how to cook them, don’t like the smell or taste, and never eat them. That’s a shame, because properly cooked and flavored even kids like them. Give it a try.

When you pick out the sprouts at the market, choose average sized ones. The tiny ones are more work because you need more of them. Don’t worry about the appearance of the outer leaves; they are going to be discarded.

To prepare the sprouts, cut off the bottom 1/4 inch or so to make it easy to remove the outer three or four leaves. The photo below shows the stages: the sprout as it came from the market, the bottom cut off and the outer leaves removed, and last, the sprout halved lengthwise. 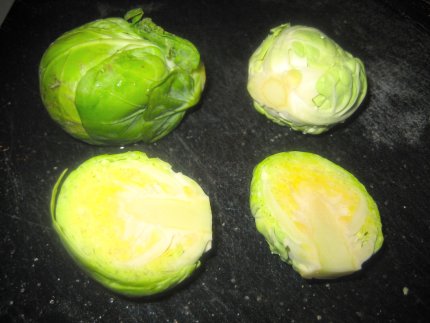 This last step isn’t necessary, and isn’t done by all cooks. I like to do it for two reasons: one, the sprout is more bite-sized, meaning the diners don’t have to cut them on the plate, and two, the main reason, is that they are very attractive inside, with their white, yellow, and avocado coloring.

Put the sprouts in a sauce pan with a half cup of water in the bottom. This cooks the sprouts mainly by steaming them. Sprinkle the sprouts generously with dried lemon peel, or if you don’t have that, some grated lemon peel, and maybe also throw a wedge of lemon into the pan.

After the sprouts begin to steam, they should be tender after about five minutes. You can poke them with the point of a knife or a sharp fork to test. Don’t overcook them.

Using the lid or the side of the sink, tip the pan to drain out what water is left in the bottom of the pan. Add about one pat of butter per serving, toss with salt and pepper, and you’re ready to serve. Keep them warm while you get the rest of the dinner ready.