We’re all in agreement here at home. This chili is the best. But I’m going to give you some options depending on how much time and effort you want to spend making the chili. But either way, I’m sure you’ll agree that this is very good chili. (Notice that the fruit called chiles is spelled with an “e” on the end. The dish made from chiles is spelled “chili” with an “i” on the end.)

I’ve added a recipe from my oldest daughter down below, which is delicious and simpler than mine. I recommend it very highly; Cindy’s Chili sure to be a hit with the crowd. It certainly is popular at our family get-togethers. It uses fewer ingredients but the results are outstanding. And it won a Blue Ribbon for her in a chili contest!

You can use bottled chili powder, which is already a mixture of several chile varieties. But if you have an extra 20 minutes or so, you can grind the powder fresh, as I explain below. I think you’ll notice the improved flavor.

You can also use ground cumin out of the bottle, and I often do. But for another small investment in time, you can toast cumin seed in a skillet for a few minutes, and not only come up with a better tasting ingredient, but will also make the house smell great!

Let’s start by toasting the cumin seed. Put three tablespoons of cumin seed into a warm skillet, and shake it once in a while. Your eyes and nose will tell you how you’re doing. Don’t burn them, so keep the heat reasonably low.

3 1/2 pounds stew meat, or one four-pound chuck roast, cut into stew meat (or 4 pounds hamburger), or a mixture with sausage as described above
garlic salt and pepper
8 slices bacon, diced and cooked, with drippings reserved. You can eliminate the bacon if you use sausage.
1 medium onion, diced
6 garlic cloves, minced
6 jalapeño peppers, seeded and chopped
6 tablespoons chili powder, or three Ancho and three New Mexico chile pods, prepared as described above
2 tablespoons dried cumin powder, or fresh powder prepared as above
2 teaspoons dried oregano
6 cups water
1 cup beef broth
1 can chopped tomatoes, preferably Ro-Tel diced tomatoes with garlic and chile
2 tablespoons sugar
juice from one lime (2 tablespoons)
salt and pepper
9 tablespoons corn starch
9 tablespoons water
1 large can of pinto beans (or other beans of your choosing), optional, but it will feed more people. 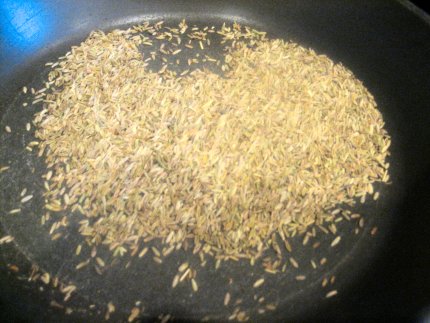 In the photo, they are almost done. Some seeds are darker than others, and that’s OK. Take them off the heat and set them aside.

If you want to make your own chili powder, and I recommend it, buy dried chile pods at the market. They will be in clear cellophane bags, with the chile variety marked on the label.

I recommend that you buy one bag of mild New Mexico chile pods, and one bag of slightly hotter dried Ancho (or Pasilla) chile pods. They will be wrinkled, but not stiff and dry. More like leather. 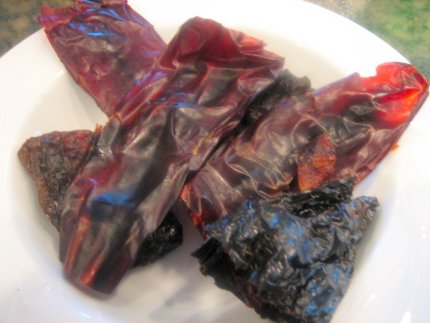 This photo shows both. The larger lighter colored pods are the New Mexico chiles, and the smaller, darker pods are the Anchos.

To prepare the pods, put them in a warm (300 degree) oven for about ten minutes. Then let them cool so you can handle them, and cut off the stem end. Open them up (over the sink) and let the seeds spill out. Wipe the inside clean, and tear them into 1-2″ pieces.

Here you need a spice grinder, a clean coffee bean grinder, or a Magic Bullet (which I use). Put the chile pieces into the grinder and run it for a minute or two until you get — surprise — chile powder! Do the same with the toasted cumin seeds. 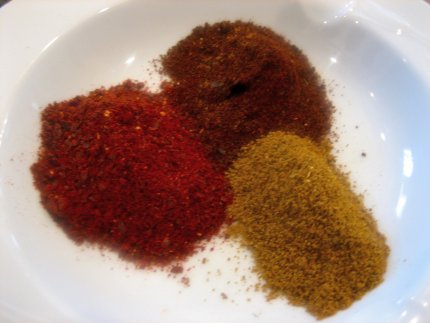 Here’s a photo of the two chile powders and the cumin. Too bad you can’t smell it. When the Internet adds that feature, we’ll use it!

It’s probably taken longer to talk about this than it will take you to do it.

For the meat, I suggest you either purchase stew meat, or make it yourself from a chuck roast. You can also use ground beef, which is preferred by many people, including some in my house. In fact we recently made a big batch for a football party and, following a suggestion from one of my kids and her husband, used 2/3 hamburger and 1/3 sausage. It was delicious. They recommend sweet Italian sausage, but I’ll bet it’s also very good with spicy sausage, or even Jimmy Dean’s sausage like I use in my meat loaf. When we used sausage, we eliminated the bacon in the recipe below.

Now here’s another option: after you brown the meat and add the other ingredients, you can either simmer the chili on the range for three hours or slow cook it either in a crock pot or in the oven at 200 degrees F. I used the oven method to test it, and it worked great. That way it can cook while you’re at work and be ready when you get home.

Using kitchen shears, cut the bacon slices into 1/4 inch pieces. In a large stew pot, cook the bacon until nearly crisp. Remove with a slotted spoon, and leave the hot fat in the pot.

Season the beef cubes with garlic salt and pepper, and brown it in batches in the bacon grease. As each batch is done, remove the beef to a plate and set aside.

There should still be some fat in the bottom of the pot. If not, add a few tablespoons of vegetable oil, and heat it. Add the chopped onion and cook for three or four minutes. Add the garlic, diced jalapeños, chili powder, cumin, and oregano. Stir and cook for another minute to blend the flavors.

Add the water, beef broth, chopped tomatoes, sugar, and lime juice. Put the beef and bacon back into the pot, stir, and cover.

Either simmer the chili on the stove for three or four hours, or place in a crock pot or a 200 degree F oven for the day. I cooked mine for 8-9 hours in the oven.

Remove the pot from the oven to the stove, or turn the crock pot to High, or uncover and turn up the heat, if it’s been on the stove all along. Mix three tablespoons corn starch and water, and add to the pot, stirring constantly. If it’s been cooking in the oven or crock pot, you may have to do this two more times to get the consistency you desire, because the chili doesn’t lose much moisture with those cooking methods.

Taste and adjust the seasonings if you need to. If you want it hotter, add some cayenne pepper. Salt and pepper are probably not required, but it may depend on how much you added earlier. A teaspoon of MSG (Accent) will also bring out the flavors more. But I predict you’ll eat and enjoy it as is!

I served it with Old South Cornbread last time I made it,  but some in our family like the northern cornbread better. I guess you’ll have to try both to decide.

Brown hamburger and sausage (with casing removed).
Add chopped onion and cook until softened.
Add rest of the ingredients and simmer as long as possible.
Garnish with some or all of the following:
shredded cheese
avocado
sour cream
onion
green chilies
cilantro
diced tomatoes