Barbequed turkey is a special treat around here, and I’ve used the method on the Barbequed Turkey page many times. But this Thanksgiving, my friend Big Al told me that I should cook it on the rotisserie, and that I would really notice the improvement. The self basting caused by the rotating turkey combined with the smoke from the smoke pan resulted in the best turkey we have ever had.

It turned out to be difficult to find a recipe for this; the Weber BBQ book had a smoked turkey all right, but it was cooked using the indirect heat method I mentioned above, on the other turkey page. But it did have an interesting brining mixture, so I decided to try it.

The book that came with my barbeque told how long to cook the turkey, and at what heat setting, but it didn’t have any recipe. But it did have good instructions on trussing the bird, which turns out to be important. So here’s what I did:

Recipe for Brining the Turkey:

You can use just salt water as I describe on the Brining page, OR

Make the following brine mixture (as described in Weber’s book The Art of the Grill.

I happen to have a large pasta pot that will fit a 13-15 pound turkey for brining. For larger birds, I use a trash compactor bag (they’re very strong). Keep the turkey cold in a refrigerator or ice chest while it brines. I did two turkeys this year, so I got to try both brines. The apple brine made the turkey more beautiful, very tasty, but a little sticky. But lots of BBQ fans love sticky, and everyone liked it. The plain salt water brine resulted in a slightly crisper skin, but not as colorful.

I took some heat from one of my cookbook reviewers for using a trash compactor bag for the brining. I assume you would use a new bag, which comes out of the factory sterile. I admit that the germy turkey will pollute the trash bag, but the salt in the brine kills germs, which is one of the classical reasons for brining in the first place. I can’t see how the bag will hurt you or the turkey. But be warned…

After you remove the turkey from the brine, pat it dry and place it in a pan to hold it while it gets skewered. (I hooked up the skewer to the rotisserie motor ahead of time, and used a magic marker to indicate where the heater was, so I could position the turkey later.) Put one set of the tines on the bar, and tighten the thumbscrew with a pair of pliers. Finger tight doesn’t hack it; I learned this the hard way when a couple of chickens got loose on the rotisserie, and it was hard to get things back under control with everything hot! 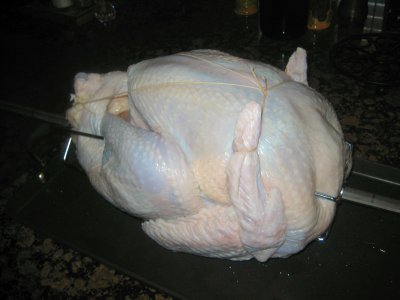 Above is a photo of the turkey ready to go into the BBQ. One string goes around the back, loops around each wing, and takes another turn around the wing tip. Then it’s tied above the breast.

The second string is necessary to keep the first one from slipping off the front of the bird. Make a loop around the legs and tie it to the first string as shown in the photo.

In my case, I didn’t need to tie the legs together, since the turkey came with them tucked in. But be sure and remove the turkey parts in both the body cavity and the neck cavity.

Then brush the turkey with either vegetable oil or butter, and put on the rotisserie. I also sprinkled the latest one with Montreal Steak Seasoning, and it added great flavor (and good looks) to the roasted skin. You can set the rotisserie heat on high for fifteen minutes or so, but turn it down to medium for most of the cooking. You will need to cook the turkey about 12-13 minutes per pound. Use an instant read thermometer to tell when it’s done; you want the breast to be about 170 degrees F and the inside of the thigh to be 180.

The temperature of the turkey will continue to rise somewhat after you turn off the heat. It should rest 20-30 minutes before carving. In the top photo, I have the turkey resting on the rotisserie with the breast down, while the meat reabsorbs some of the juices.

During cooking, the turkey stayed so moist on the outside that I didn’t even bother to baste it. It really is self-basting. All I did was add wood chips to the smoke pan every 20 minutes or so.

The day before, after I had put the turkey in to brine, I made the gravy. I preheated the oven to 375 degrees, and put the turkey neck and giblets in a roasting pan. I added some chunks of celery, onion, and carrot, and tossed them with a little oil, garlic salt, and pepper. I stirred them after 30 minutes, and after an hour the ingredients had browned nicely.

Next I deglazed the pan with a cup or two of red wine, scraping up the bits from the bottom of the pan. Now as the gravy started to thicken, I added four cups of chicken (or turkey) broth. After thickening for 20-30 minutes, I scooped out most of the solids, and discarded them. The rest of the solids I removed by pouring the gravy through a strainer into a sauce pan, where I let it cool down. If you are making the gravy the day ahead, refrigerate it until it’s time to re-heat.

After you have finished this delicious turkey, there are several things you can do with the carcass. If you don’t make soup, however, I suggest you use it to make some turkey broth you can freeze and use for the next turkey’s gravy.

Put the carcass, bones, excess meat and skin into a large pot and add water to nearly cover. You don’t need to completely cover the carcass, because as it cooks it will come apart into little pieces and take up less room in the pot. Add some peppercorns, a few bay leaves, some chunks of carrot, onion, and celery and bring to a boil. Simmer for several hours (the house will smell great again!), then cool, strain, and freeze.

Cooking the turkey on the rotisserie is without a doubt the best and easiest way to prepare a turkey, as long as it is under 15 pounds, or whatever size will fit in your barbeque. If you have a rotisserie and have been ignoring it, get with it — you’ll be amazed at what you’ve been missing!