Roast pork is always a good bet when a flavorful, hearty meal is called for. And this recipe has a delicious caramelized onion sauce to go with it. I prefer a shoulder roast over the more popular pork loin roast because modern pork has become so lean that juicy flavorful pork loins are a thing of the past. But the shoulder is still very good, and can produce a delicious roast in addition to the other things the shoulder is used for, such as barbeque pulled pork. But don’t be afraid to use this recipe with a loin roast if that’s what you want.

If you have leftovers, you can make pulled pork sandwiches, because the flavorings used here don’t interfere with the pulled pork seasoning.

You can use a six pound shoulder with the bone in, as shown in the photo, or you can use a boned shoulder that weights a little less, but you should tie twine around it in four or five places to hold it together during roasting.

The shoulder roast is also called Boston Butt Roast, so your market may sell it under either or both names.

Allow six hours from start to finish, so this is probably either a weekend meal or you start it when you leave home and it will be ready when you return. It should, however, sit outside of the oven for at least another hour before carving.

Don’t expect to get nice even uniform slices from this roast like you would a pork loin. This roast comes apart naturally between its sections, and you carve each piece across the grain. It may fall into several pieces by the time you get it on the plate, but it’s going to get covered with a rich brown onion sauce, so it doesn’t hurt the appearance much. But I guarantee you are going to love the flavor.

Preheat oven to 300 degrees F. If you purchased a boneless roast, use twine to make belts around it in three places across the roast and once or twice around each end. Sprinkle the roast all over with garlic salt and pepper.

If you have a spice grinder or a Magic Bullet, you can put in the rosemary, sage, and fennel seed and the grinder will make you a nice rub for the roast. If you have to chop them by hand, make them reasonably fine, but it’s not necessary to work too hard, as they mainly flavor the outside of the roast and the juices. (They also make the house smell great while the roast is cooking!) Anyhow, after they’re mixed, smear them all over the roast.

Coat a roasting pan with cooking spray. The pan should have reasonably deep sides; two or three inches if you got one. Put the seasoned roast in the oven.

After three hours, add the onions. To get wedges, cut off both ends, set the onion on what was the root end, and make cuts 90 degrees to each other, and then at 45 degrees to wind up with eight wedges. Like cutting a big fat round pizza. Peel off the outer layer, if necessary, and rub each wedge with a little olive oil, and a little salt and pepper. Scatter them in the pan around the roast, and toss to mix with the meat drippings. (If you have an unusually lean roast, you may have to add some water to the pan once in a while.)

After two more hours, the roast will have reached an internal temperature of 170 degrees or more. Take the roast out of the oven, put the meat on a platter or cutting board, and cover loosely with foil. Let it sit for at least an hour, which will give you plenty of time to get the sauce and the rest of the meal together.

Put the roasting pan on the stove and tilt it so you can skim off most of the fat with a spoon. Then turn on the stove, and get the juices (and onions) in the pan simmering. Add the wine and scrape the pan clean with the flat end of a spatula. (This is called deglazing the pan, loosening the fond from the pan into the sauce. Add the cider, honey, and vinegar, and simmer the sauce for 1/2 hour or so. The sauce will become very dark and flavorful. 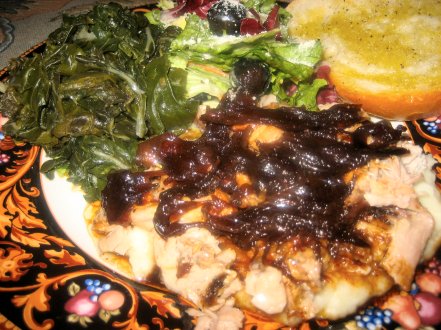 Carve the pork into its natural pieces, and slice those across the grain for servings. Top with the sauce. In the photo at right, I’ve served the pork on top of mashed potatoes, with cold applesauce, Swiss chard, and a green salad on the side. Notice how dark the caramelized onions and sauce become. Man, do they ever flavor those potatoes!

I sliced fresh French bread and drizzled it with olive oil to go with this dinner. I got rave reviews from every single eater that night!