Here’s a way to serve a crowd an elegant and delicious meal. You have your butcher put two pork rib roasts together to form the crown. The resulting roast weighs about 10-12 pounds, and serves 20-25 people easily. The roast will cost about $50-$55, which isn’t too bad for a first-class dinner for that many people.

If this were beef (not made into a crown) it would be a standing rib roast, or prime rib as it is usually called. Each of the ribs would be a rib eye steak. So this is the pork equivalent, one of the best cuts of pork. Each piece individually is a rib chop, which is the pork chop I recommend.

Most of the meat is at the bottom of the crown, as you can see in the photo. Because of this, it is best to start roasting the meat upside down so the bones don’t burn while you are cooking the meat. If you have time, I recommend you brine the meat for two hours before cooking the roast.

After brining, rinse off the roast and season it all over with a sprinkle of garlic salt, pepper, and some chopped rosemary. Let it sit at room temperature for about 1/2 hour. Place the oven rack in the lower third of the oven and preheat to 350 degrees.

Place the roast upside down in a roasting pan. Sometimes you will need to place two or three small objects like shot glasses under the edges of the roast to keep it standing up.

When the oven is hot, put the roast in for about one hour. Then turn the pan around and roast for another hour. About that time the interior of the roast should be 100-110 degrees. In the meantime, prepare some little strips of aluminum foil that you will use to cover the bones.

Take the roast out of the oven, and using wads of paper towels in each hand, turn the roast over and cover the ends of the bones with the foil. Raise the temperature of the oven to 425 degrees. 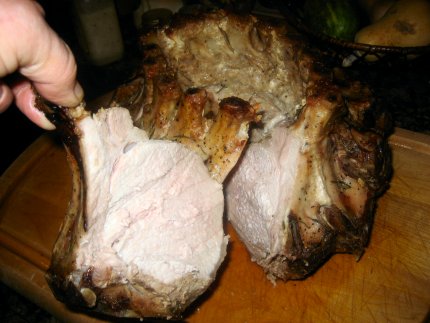 When sliced, you will get beautiful rib chops, slightly pink, and moist and tender. Serve with cold applesauce. We had this roast on New Year’s Day, and served it with Hoppin’ John for good luck!