Most people confuse barbequing and grilling. This page is going to cover both, so you will know the difference and can do either.

Most people don’t have the equipment or the time to really barbeque, and settle for grilling instead. And that’s ok, you can still prepare delicious ribs by grilling them.

The first step is to coat the ribs with a dry rub and bag them for at least an hour and preferably overnight. Some people cut the ribs into three or four-rib serving pieces, or divide the rack into two pieces, as shown in the photo. That’s just for easier handling and bagging.

Some people also remove the silvery membrane from the back of the ribs before marinating them in the dry rub. If you want to do so, use the tip of a knife to loosen the edge near the first bone, and, using paper towels, a cloth, or pliers to get a better grip, tear the membrane off the back side of the ribs.

While the ribs are marinating, make up some Mop Sauce to use during cooking:

After marinating, prepare the fire for either grilling or barbequing. To grill, light the fire like you would for hamburgers or steaks. When the fire’s ready, grill the ribs bone side down for about 30 minutes. Turn the ribs over and cook for another 20 minutes. Mop often, and move the ribs around if you need to control flare-ups. You can also use a water spray bottle to keep the flames down. When they’re done, put them on a platter, give them another mop job, and sprinkle some dry rub over them to make a nice crust. These grilled ribs are so good that you probably will decide it’s not worth the extra time and trouble to barbeque them. Probably. But I know some barbeque-heads that will have my head over that. So read on.

To barbeque, light the fire, and then pile the coals over to one side so the meat can be placed on the other side. You will need to use the cover to keep the smoke in. To make smoke, you will need to soak some wood chips and add them to the charcoal every 20 or 30 minutes to keep the smoke coming. You will also have to add more charcoal now and then, so keep the chimney starter working to light more. But the temperature inside the BBQ should be only about 225 degrees. At this temperature, the ribs can be cooked two or three hours; at 200 you can go six or so. But don’t dry the ribs out. Use the mop sauce as described above, but don’t open the lid and mop until it’s time to add more wood or charcoal when you have to open it anyway. 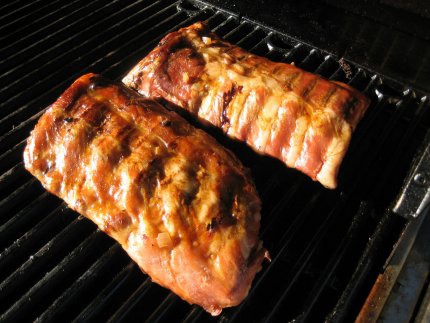 So if you want the ultimate smoky tender ribs, barbeque them. But if you don’t have the time, grilling is a faster, low-risk delicious alternative.

If you want ribs in the winter, or when the weather’s bad, or if you don’t have a grill or BBQ, there’s a good oven method I’ve used very successfully. After all, the idea is moist heat, slow cooking, and smoke. So put the dry rub on the ribs as described above up to a day ahead. Preheat the oven to 250 degrees. Then put the ribs in a covered oven-proof pot with 1/2 cup bbq sauce, 1/2 cup vinegar, 1 cup of beef broth, and 3 tablespoons of liquid smoke. Your place will be smelling like a real bbq joint in no time. After a few hours, the ribs will be tender and juicy, with a great BBQ flavor. Some people like to cook them until the meat is falling off the bone, but most BBQ experts call that “white boning” and consider them overdone at that point. Personally, I like white boning for beef short ribs, which you can cook using this same method. Either way, serve the ribs with your favorite (or homemade) barbeque sauce.