There must be a million bean recipes. Maybe a billion. Anyhow, I’ve tried and collected dozens myself trying to get the taco shop bean flavor, and finally I’m darn close. If I come across an improvement, you’ll be the first to hear about it.

The beans always start out as pot beans, or in Spanish, frijoles de olla. Now these beans are plenty good by themselves, and we eat them lots of ways. They also can easily be turned into cowboy beans (or frijoles caballero), barbeque beans, drunken beans (frijoles borrachos), or used in chili. In the photo above, I’m serving the beans right out of the pot with some grated cheese. (Along with New York Steak Arrachera.)

But the real treat is to turn them into Refried Beans, shown below.

Here I’m going to give you several recipes, and as always, you can modify them if you enjoy experimenting.

Contrary to the first two million recipes for pinto beans, you don’t have to soak them first overnight. You also don’t have to do the “quick soak” method, which brings them to a boil and then has you let them sit there for an hour. No, mi amigo, if they can do it this way in Tucson Mexican restaurants, that’s good enough for me. Rinse ’em and cook ’em.

I’ve seen and tried recipes for pintos that include lots of ingredients and vice versa. But here’s the winner, in my opinion:

Sort through the beans as you add them to the pot, looking for and discarding the little pieces of New Mexico soil and pebbles that are usually included in the bag as gifts. Swish the beans around in the water to clean them off, and then drain the rinse water. Here’s what’s in the pot that goes on the stove:

The epazote is optional, but if you’ve got a market in the area that sells it, use it. It adds a flavor you can’t get any other way. Sometimes you see cilantro called for as a substitute, but it’s not even close.

OK, now you’ve got the pintos in the water on the stove and you’re standing there with a whole head of garlic in your hand wondering what to do next. Here’s what you do: cut the top off the garlic, and tear the head apart into individual cloves. Now peeling each clove is easy if you first cut off the root end and smash the clove under the side of your knife, giving the knife a gentle bash with your fist, if necessary. Now the peel and the garlic part ways easily, so you can chop the pile of garlic and dump it in the pot.

As the beans cook, and you stir them once in a while, the onion, garlic, and epazote will vanish.

The pot needs to simmer for three hours or so, so you can keep the heat pretty low, or even use a crock pot and let them cook all day. Toward the end of the cooking time add salt and pepper. Taste the beans, and when they’re tender and yummy, they’re done.

Serve them with the garnish(s) of your choice: cilantro, shredded cheese, salsa, catsup (what? yep, the kids love that), Tabasco, chopped onion… you get the idea. Save the leftovers for later in the week, or better yet, make Refried Beans out of them.

To turn the pintos into Refried Beans, put them in a skillet and warm them up. Add a 1/4 cup of melted lard or bacon fat (the lard is best) and stir. Add more and stir more. Some Mexican cooks then finish off with some canned (condensed) milk to give them that wonderful rich taste and light brown color. How much lard and milk is up to you, and depends also on how many beans you started with. Start with 1/4 cup of lard and 1/2 cup of milk per pound of beans. Omit the milk if you wish, and don’t be afraid to experiment. But if you’ve ever eaten good refried beans, you’ll know it when you get there. In the photo above, I’ve melted grated Mexican Blend cheese over the beans before serving. Or you can use Jack and Cheddar.

For the ultimate flavor, render your own pork fat. You’ll need about 1/3 pound of fat, which your butcher may sell you for $1 a pound, or maybe free. Slice the fat into strips, and put in a sauce pan with a little water. Heat it up and boil off the water. Let the crackling begin… After while, you’ll have the cracklins floating around in the liquid fat. (Thanks, Terry in Virginia, for getting my terminology correct!) When they have rendered all the fat they can, scoop them out with a slotted spoon onto a paper towel and lightly salt them. Now you’ve got some cracklins to munch on while you stir the fat into the beans. I hope heaven is this good…

By the way, the cracklins are called chicaron in Mexico, and besides being a great munchie are used in Frijoles Charro (see below). 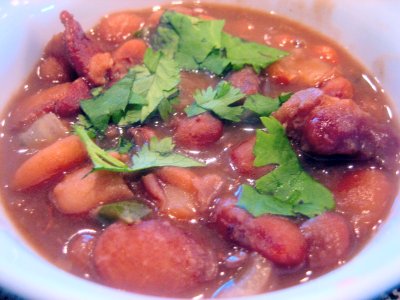 Frijoles borrachos start with the pot beans, with one exception. Add two strips of thick-cut smoked bacon chopped up when you make the pot beans. (You’ll probably like this so much you’ll do it every time for all the bean recipes.)

When the beans are nearly done, fry another four strips of bacon, chopped up, until nearly crisp. Remove the bacon, and all but two or three tablespoons of the bacon fat. Add the chopped onion and jalapeño and fry for about 10 minutes. Dump the mixture into the beans with the cooked bacon, and re-heat the beans. If the beans are too watery, just simmer them uncovered for a while but don’t forget to stir them. If they stick to the bottom of the pot and char you’ll have a lot more smoky taste than you want!

Oh, by the way, the tequila adds a wonderful flavor, but despite the name Drunken Beans, there won’t be any alcohol left at serving time.

Make the pot beans and add your favorite BBQ sauce.

For this recipe you’ll need to make the chicaron, described above.

Fry the bacon until done, and add the remaining ingredients except for the pinto beans. Fry the vegetables in the bacon fat until tender, and add the chicaron. Fry another few minutes, and add the beans along with some of their cooking liquid. Simmer for 15 minutes or so. Serve in bowls.