Lamb chops are always a treat, but this Cooking Dude original was the biggest hit yet. They are enhanced by a Dijon mustard, red wine, garlic, and rosemary sauce. In the photo, notice how the wine has turned the garlic pink.

For this recipe you should use loin chops, which look like small porterhouse steaks. They should be at least one inch thick. Allow one chop per light eater, and two for more hearty appetites. I’ll average out the recipe for six chops.

In the photo, I show the lamb chop served with pan roasted potatoes and Caesar salad.

Sprinkle the chops on both sides with a little garlic salt and pepper, and spread a thin coating of the mustard over the chops. Let them sit for 15 minutes or so to marinate.

Heat the butter and oil in a skillet, and add the chops. Turn after ten minutes, and cook six or seven minutes on the other side. The lamb chops should be medium, about 145 F internal temperature. 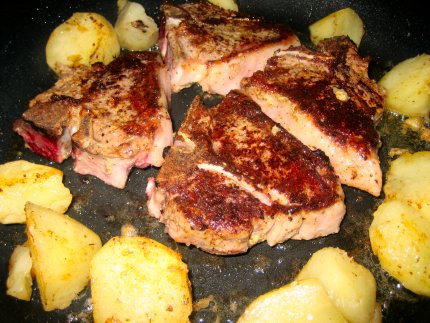 In this photo, I’m using some space in the same pan to brown some potatoes I microwaved for four minutes previously. You can see more about that on the pan roasted potato page.

Remove the chops (and potatoes, if they are there) to a plate and cover to keep warm. Add the wine to the pan to deglaze it, scraping up the goodies that the chops have left in the pan.

Add the garlic, rosemary, and broth and simmer for five or ten minutes to reduce the sauce a little. Whisk in the butter a tablespoon at a time to thicken the sauce, and serve. A good salad, red wine, and French bread makes this a special (and easy) meal!