I fixed this for Easter, and what a hit! Two people in the crowd thought they didn’t like lamb, and after they tasted this, they were converted instantly. This was one of the most raved about holiday meals I’ve fixed.

I purchased a leg of lamb at the market, and asked the butcher to bone and butterfly it. He did, and didn’t even charge me to do it.

The day before cooking it, I marinated it, and the next morning turned it over and marinated it until it was time to cook it. The weather cooperated, and I grilled it on the barbeque outside, cooking it like a big steak. If I had to, I was prepared to roast it in the oven indoors, but the smoky crust would have been missing.

I served 12 people with this, along with family favorites Easy Cheesy Potatoes (a double batch), Pearl Onions in Parmesan Cream Sauce, and Garlic Bread.

If possible, begin marinating the lamb a day ahead. But even if you only have a few hours or less, the marinade will add important flavor even if it doesn’t have time to penetrate the meat very far. 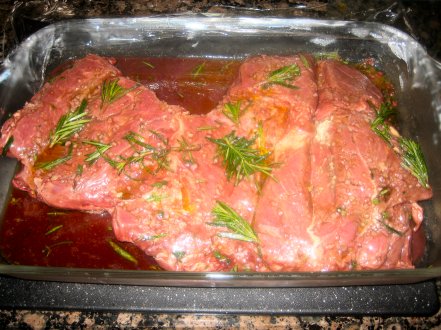 Stab the roast all over with a small knife, making slits that you can get the marinade to penetrate. If you use fresh garlic, slice thin pieces that you can push into the slits. Otherwise, mix the ingredients and coat the roast, massaging the marinade into the cuts you made in the meat. Put the marinade and meat into a glass baking dish, sprinkle it with a little salt and pepper, and cover with plastic wrap and refrigerate if you are going to marinate it for more than a couple of hours.

If you marinate it overnight, turn the meat over the next morning to give the other side a good coating.

An hour before cooking, remove the dish from the fridge and let warm up for an hour or so before cooking. You can use this time to get the rest of the meal ready. For example, the meat will need about 40 minutes on the grill (depending on the heat of the grill and the thickness of the meat), the Easy Cheesy Potatoes take about 40 minutes, and the Pearl Onions about 30 minutes. So get them ready now, and put them in the oven(s) when you start to cook the meat.

(The potatoes and onion recipes call for different oven temperatures. But if you only have one oven, just compromise and make them share, by adding the dish that needs less time in the oven later. Most casseroles will be OK with a higher temperature for slightly less time. But don’t try that with anything you’re baking, like cakes, flans, or soufflés.) 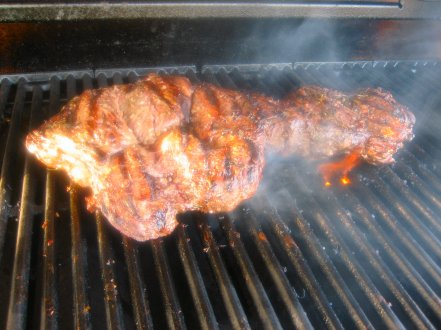 Cook the meat on a fairly hot grill, moving it around if it flares up too much. Some flame is good, because it adds flavor to the seared marinade. While the meat is cooking, discard the extra marinade and rinse the dish before putting the cooked meat back in it.

The meat should cook to 135-140 degrees if you want it pink in the thickest parts. The internal temperature will continue to rise, cooking the meat further after you take it off the fire. You’ll need to turn the meat after about 20 minutes, and check the temp now and then with an instant-read thermometer. If you don’t have one, you can make a slit with a knife and peek once in a while. (You can do this with a roast you’re going to carve; I don’t recommend making a cut in your guest’s steak, however.) The total cooking time should be 35-45 minutes, depending on the heat of the fire and the thickness of the meat.

Let the meat rest on the cutting board for at least 20 minutes before carving. Cut the meat into its natural sections, and slice across the grain. Serve with horseradish sauce. I know mint jelly is traditional, but not around here…

This meat is tender, succulent and very flavorful. As I said in the beginning, the two people present who thought they didn’t like lamb sure changed their tune in a hurry!