Taco night is always popular at our house. They aren’t much work, and they are always fun to make and to eat.

We usually use ground beef in our tacos, but there’s no reason not to use chicken, pork, fish, shrimp, or just beans if you want to. Sometimes the taco’s preparation changes depending on the main filling, but unless you’ve got taco police roaming around, go ahead and experiment with any combination you want. For an occasional special treat, I’ll make Carne Asada Tacos. That always gets me a round of applause!

Typically tacos are made with corn tortillas that are either baked, fried, or just warmed. Meat tacos typically have crisp shells, made that way by frying or baking. The seafood tacos usually have warmed soft tortillas, usually two layered together per taco so they don’t fall apart.

You can buy the taco shells already made, or you can purchase corn tortillas and make the shells yourself. Of course, there are pros and cons to everything. To me, the flavor of fried fresh corn tortillas is worth the extra time and effort, but I admit to often using the pre-made taco shells to save time or when I’m just lazy.

Pre-made taco shells are cold out of the package, of course, so they need to be warmed. The easiest way is in the oven, and I usually fill them with the meat mixture and add some grated cheese before putting them in the oven. 350 degrees for 10 or 15 minutes works fine. Then as the shell warms up, the meat also warms and the cheese melts. After you add the cold ingredients, plus whatever sauce or salsa you want, you’re ready to roll.

The tacos shown in the photo had their shells fried in a deep fat fryer, which makes them very flavorful, tender, and puffy. I have a taco forming tool that holds the tortilla in the proper shape while dipping them in the oil. You can also fry them in oil in a skillet, and if they puff up too much to fold, you can poke the puffs with a long fork to let the air out. The idea is to get them fairly crispy, but not so stiff that they break when you try to fill them.

Here’s a general recipe, for a dozen Tacos. Feel free to experiment!

Mary Ann, Mom’s caregiver angel from Fiji, invented the idea of mixing all the garnishes together. The tacos in the photo were made that way. It sure speeds up the assembly line; but then everyone needs to like the same ingredients, of course.

So for beef tacos, get the hamburger frying in the pan, and after some of the pink goes away, add half of the chopped onion. Stir and cook, adding the garlic salt, pepper, and cumin. After the meat is done, you can keep it warm, or even let it cool if it’s going to get re-heated in the oven in the taco shells. I usually do that, even if I have fried my own shells. By the time all the shells are done, they aren’t warm anymore, anyway. 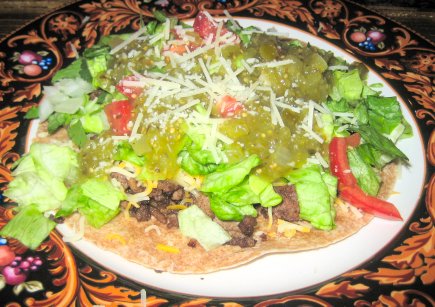 Above is an open-faced taco made with a whole wheat tortilla. I just warmed the tortilla on a griddle for a couple of minutes and made a low-cal version that tastes great. Ms. Cooking Dude likes these, and with her favorite salsa, Herdez Green.

Traditionally, if you make seafood tacos, you not only use warm soft tortillas, but you also would use shredded cabbage instead of the lettuce. A light mayonnaise dressing is usually added to the cabbage, and chopped fresh cilantro is a must. But don’t be afraid to experiment, and if you have some tacos at a restaurant that you like, take note of the ingredients and modify your recipe.

Tacos can be served by themselves, or with a side dish of Refried Beans. Obviously, Mexican beer is probably the most popular drink, but just ice water with a lemon or lime wedge works fine.