As I have mentioned elsewhere, the New York steak is our favorite compromise of the best steaks. The filet is more tender but with less flavor, and rib eye steaks are more flavorful but with more waste. The New York cut wins by being second in every category. But we still eat other steaks now and then for variety.

This recipe is actually a method more than a recipe. You can use it with any steak, but how you cook it will depend on the steak.

For example, if you are pan-frying the steak, you can cook 1/2 to 1″ steaks in the pan, making a pan sauce after they’re done. For thicker steaks, brown them a few minutes on each side and finish them in the oven.

The reason for finishing thick steaks and roasts in the oven is because direct cooking will overcook the outside before the inside gets to the degree of doneness you want. Black on the outside and bright red on the inside. But in a moderate oven, it cooks uniformly so it’s the same color throughout, as in the photo.

Season the steaks with garlic salt and pepper, Montreal Steak Seasoning, or one of many other options. Experiment and see what you like. Here’s a photo of the New York steaks before cooking and carving.

Whether you cook them inside or on a grill, use a meat thermometer until you learn to judge the doneness of the steak. The internal temperature will continue to rise after you take them off the heat, so allow five degrees or so (more for thick steaks) leeway.

For rare, you want the internal temperature to be 125 F at serving time. For medium rare, figure on 135 degrees, for medium 145, and for well done 160 degrees F. 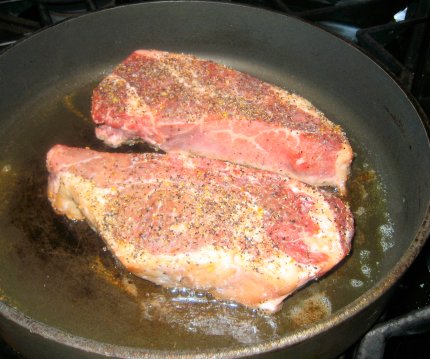 For the two inch steaks shown in the top photo, I browned them in the skillet for about five minutes or less on each side. At this point, I could put them skillet and all into the oven to finish, but I needed the skillet to make a pan sauce. So I transferred the steaks to a roasting pan and put them in the 250 degree oven for about 30 minutes.

When can you stop using a thermometer? Well, to be on the safe side, it’s not a bad idea to double-check yourself by using one. But if it’s not convenient, or you’re grilling outside and you can’t see very well, you need other methods.

Time alone is not very good because the thickness of the meat and the heat of the fire, among other things, will affect the result. The pros do it by feel. Press on the steak with your finger or a spatula and see how hard it feels.

The classic example uses your hand to teach you the feel. The fatty area between the base of your thumb and your index finger gets softer and harder as you squeeze or relax your fist. Relax your fist and poke the spot with your other index finger. That feeling is rare meat. Very soft. A gentle squeeze of your fist will make it feel medium, and a hard fist will feel like a well-done steak.

Practice the feel of the steak, and confirm your findings with the thermometer and your eyes when you cut the steak. You’ll pick up the knack in no time. (By the way, cutting the steak is also a way to check its doneness, but don’t do it on your guests’ steak!)

The steak in the photo is being served with Red Wine Pan Sauce, Pan Browned Red Potatoes and Swiss Chard. The dinner was a big hit. You’ll also like the variety of serving different sauces now and then, like the Rooster Sauce or the Tarragon Blue Cheese Sauce.