Without exception, when I announce I am making meat loaf for dinner there are cheers all around. Far from being an unappetizing budget dish, a good meatloaf is a first class dish in itself.

I know that good meat loaf doesn’t just happen. There are hundreds of lousy meat loaves made and served every day. I’ve made some of them myself, while experimenting with new ideas. Like adding oatmeal — makes it gummy. Low fat meat — makes it dry and hard to swallow.

I still experiment once in a while, but not when the household is anticipating a first-class meat loaf dinner. I keep meat loaf experiments to myself!

Plan to serve it with potatoes, baked, mashed or otherwise. In the photo are peas, mashed potatoes, French bread with olive oil, and a salad. Yum.

In a large bowl, break up the sausage and hamburger into pieces and let them come up to room temperature while you get the rest of the stuff ready.

Chop the celery and onion. You should wind up with a cup or so of each.

In a four cup mixing bowl, or something similar, break the two eggs, add the milk, stir, and add all the rest of the ingredients. Mix it all up, and add the chopped vegetables, and mix again.

Get the oven heated up to 375 degrees, and a pan sprayed with Pam. If you have meat loaf pans, this recipe will fill two of them. (Meat loaf pans have one pan nesting inside another, with holes in the top pan to drip into the second. Otherwise, you may want to remove some of the juice from the roasting pan with a basting bulb to keep the meatloaf from swimming around in its juice.) Put the pans near the large bowl that contains the meat.

Now pour all the stuff in the mixing bowl over the meat. After washing your hands and removing rings and watches, knead the whole mess until it is reasonably well distributed. Form the mixture into one large loaf, and then cut in half with your hand. Lift half the mixture with both your hands and pat it into a loaf shape. Either put the loaves into separate meat load pans, as shown in the photo above, or put them side by side in a larger pan. 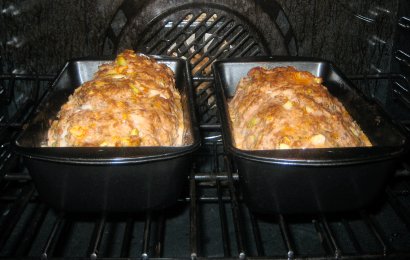 Bake for about 45 minutes, until the tops are brown and the interior temperature reaches 140 degrees. Remove from the oven and let cool for 15 minutes or so before removing them from the pans. Usually they will come out of the pans in one piece by either stabbing them with a large fork or by sliding a spatula underneath. Put them on a cutting board, slice, and serve.

Some people like one or more condiments, like catsup, Worcestershire sauce, Tabasco, barbeque sauce, horseradish sauce, or even salsa. Hey, it’s your meat loaf. Do whatever you like. And don’t forget to make meat loaf sandwiches with the leftovers. Meat loaf and eggs make a great breakfast, too!