I guess we all ate macaroni and cheese when we were kids, and lots of kids still do. But an interesting thing has happened over the past few years. Mac and Cheese has begun appearing on more and more menus, from diners (as usual) to steakhouses and fancy restaurants.

The reason is that macaroni and cheese is one of the classic comfort dishes, and if properly made, very delicious, like meatloaf and fried chicken. And like those other two dishes, there are nearly as many recipes as there are cooks.

After trying lots of recipes for macaroni and cheese, and after reading dozens more, I’ve come to a few conclusions. One is that using eggs to make a custard is not necessary. Another is that using only cheddar cheese runs the serious risk of creating a grainy, oily mess if you’re not careful.

I’ve also come to the conclusion that if your only experience with mac and cheese is from the famous blue box, I’ve got news for you. Going to the extra trouble to create this dish from scratch puts it right in the “have it for company” category.

You can buy the Monterrey Jack and Cheddar cheeses separately and grate them yourself, or you can do as I do and buy a one or two pound bag of the same two cheeses, already shredded and mixed. If you wish, you can use three cans of condensed milk instead of the milk and cream. I think it tastes better that way, but it might not be worth an extra trip to the store if you already have milk and cream on hand.

The stick of butter will probably have tablespoon markings on the wrapping, but they may be crooked or bunched down at one end. Anyway, the whole stick contains eight tablespoons, half is four, and so 3/4 is six. That’s where you cut the butter to use six for the sauce and two for the topping.

Put the water in the pot, sprinkle with salt, and drizzle in the oil. Start it heating while you get the sauce and topping made.

Melt the six tablespoons of butter in a large sauce pan, and add the flour, garlic, mustard, and nutmeg. Cook for a few minutes, but not so long that the flour gets brown. (For a light-colored sauce, we cook the flour so it’s not raw, but not very brown. For a dark sauce or gravy, we cook the flour longer so it gets the color of peanut butter. See Making a Roux for more information.)

In a small bowl (I use a little metal bowl that I can put on the side of the burner), melt the remaining two tablespoons of butter. Add the rest of the topping ingredients, and toss with a fork to coat the bread crumbs and cheese with the melted butter. Stir and fluff it up with the fork, and set aside.

Hopefully by now the water is boiling, and you can dump in the macaroni. Stir it as you add it, so a little of the surface oil will get on the noodles. Bring it back to a boil, turn the heat down a little, and boil for seven minutes. Stir it every few minutes because it will settle to the bottom of the pot and not cook uniformly.

Pour the cooked macaroni into a colander or strainer to drain. After the water has drained off, put the macaroni in the baking dish. Pour the sauce over the macaroni, and stir to combine. Sprinkle the topping over it, and put it in the oven.

Bake for 25 minutes, remove from the oven, and let sit for five or ten minutes before serving. 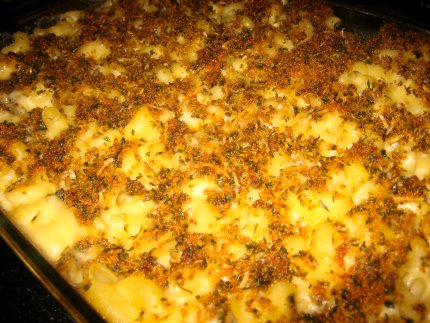 This macaroni and cheese is delicious. It goes great with almost any food, including burgers, hot dogs, steaks, barbequed ribs, or by itself with bread and butter for lunch! Enjoy!