The sandwich shown in the photo is an open-faced knife and fork sandwich. But if you want a hold-in-the-hand type of sandwich, just use two pieces of bread.

This one is made of bread, ham, egg, and cheese. Of course instead of ham you could use whatever else suits you, including bacon, meat loaf, corned beef, turkey, chicken, hamburger…you get the idea. 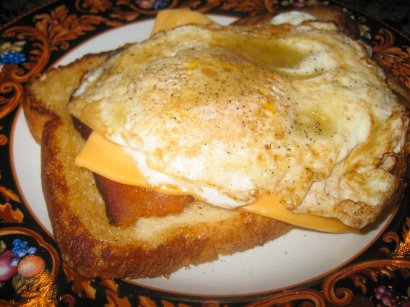 The good news is that I fix this in only one skillet. It’s easy to make, and easy to clean up afterwards. It’s also very yummy.

Here’s what you do: 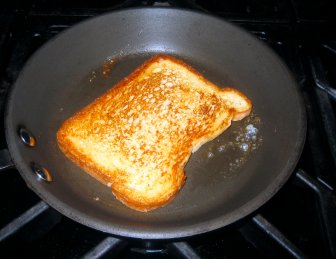 Heat up the skillet, drizzle a little olive oil into it and add a dab of butter. After the butter stops sizzling, but before it starts to brown, put in the slice of bread and swirl it around so it gets a little coating of the oil and butter. In a few minutes, after it’s golden brown, take it out and put the slice of ham in the skillet for a few minutes to warm it up. When it’s hot, take the ham out of the skillet and put it on the toast. 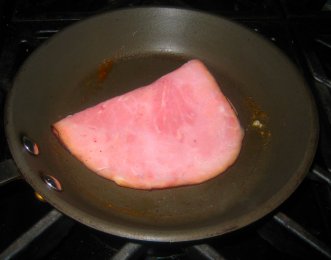 Now add a little olive oil and butter if necessary, get it hot, and break the egg into the skillet. Swirl it around a little to break the yolk and distribute it into the white. Make the puddle about the size of the bread, and let it set up for a couple of minutes before turning it over. After you turn it, add a slice of cheese and let it start to melt.

Add the cooked egg and melted cheese to the ham and toast, and top with salt and pepper. Or, as shown in the photo, Hot Salt. 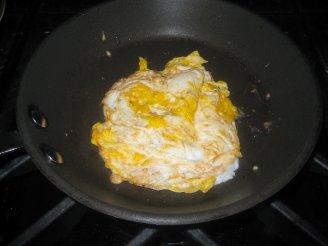 Those are the basics. Modify the recipe depending on what leftovers you find in the fridge.