We try to always keep uncooked flour tortillas and shredded cheese on hand for quesadillas. Great for a quick lunch or breakfast, we just throw a tortilla on the griddle, turn it over when it’s brown on one side, fill it with cheese, and fold in half. That’s a normal quesadilla.

About twice a year when we were passing through El Centro on our way to or from Phoenix, we got to where we would time our departure so we could have lunch at Celia’s restaurant. One of their specialties was called Special Quesadilla (I think) and it was deep fried and really delicious. We knew we couldn’t make such a thing with regular tortillas; we’d have cheese in the hot oil and some kind of mess to clean up.

Fast forward to getting a haircut in San Diego, where the Cooking Dude got into a conversation about Christmas. It turned out that the hairdresser went home to El Centro for the holidays, which caused me to ask if she had ever been to Celia’s. Yes, she said, her aunt and uncle owned it. What? Yep.

She said she had never worked there, but here’s what they did at home. And that’s also now what I do at my home.

The key is to start with uncooked flour tortillas. Well, we just happen to have those at home already. You spread the cheese over half, leaving a margin around the whole circle, moisten the edge, and fold over to seal. After the seal dries, you can fry the quesadillas without the cheese getting in the oil. 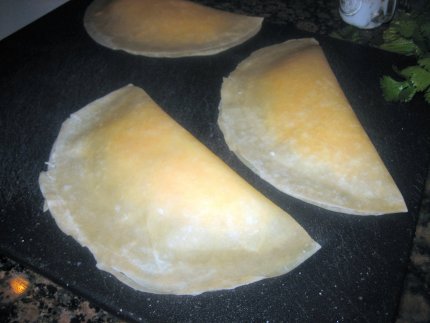 The photo above shows the quesadillas ready for cooking. They are large enough so I can’t use my deep fryer, so I just heat about 1/2 inch of oil in a large skillet.

Fry the quesadillas a minute or two on each side. The bubbling will stop when it’s time to turn them or take them out. Then we cut them up with a pizza cutter (or quesadilla cutter) and serve.

You can use won ton skins to make a smaller version for another delicious appetizer. Don’t overlook the possibility of putting some extras inside, like jalapeño slices!