One pot tacos? Cooking Dude’s latest invention! This will work with the Ninja Foodi and probably most air fryers. Sorry, Instant Pot can’t do this.

The other night I wanted some homemade tacos, but it was only for me, and it seemed like a lot of work for only a couple of tacos. I wondered about frying the meat and the taco shells at the same time in the same pot. Boy, would that be easy for one or two people. Maybe up to six tacos.

The idea was to cook the meat using the Air Fryer function on the pan that would also let the meat drain, like with the hamburger patty in the last lesson. Why not suspend the shells in the hot air so they could crisp at the same time?

Well, it worked, and here is the method.

I had purchased earlier two large beef patties that together weighed about a pound. I figured I would only need about ¼ pound for two tacos, so I made three ¼ pound patties, put them in the freezer, and tore up the other ¼ pound into pieces. I then added garlic salt, ground chili powder, a little cumin, and some diced onion. 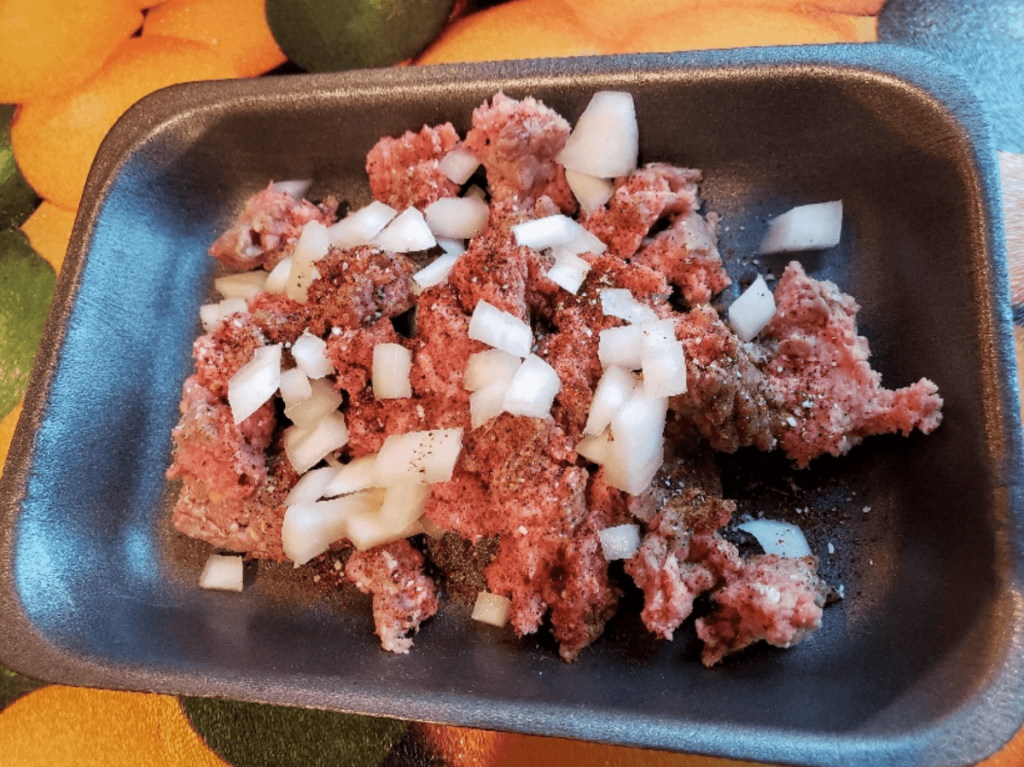 And, yes, in case you are wondering, that is the plastic tray the meat came in. Why dirty a dish when you are staring at a disposable one?

I Pammed the Foodi’s Air Fryer Basket, and added the meat. Then I sprayed both sides of the two tortillas and draped them over a rack over the raw meat. 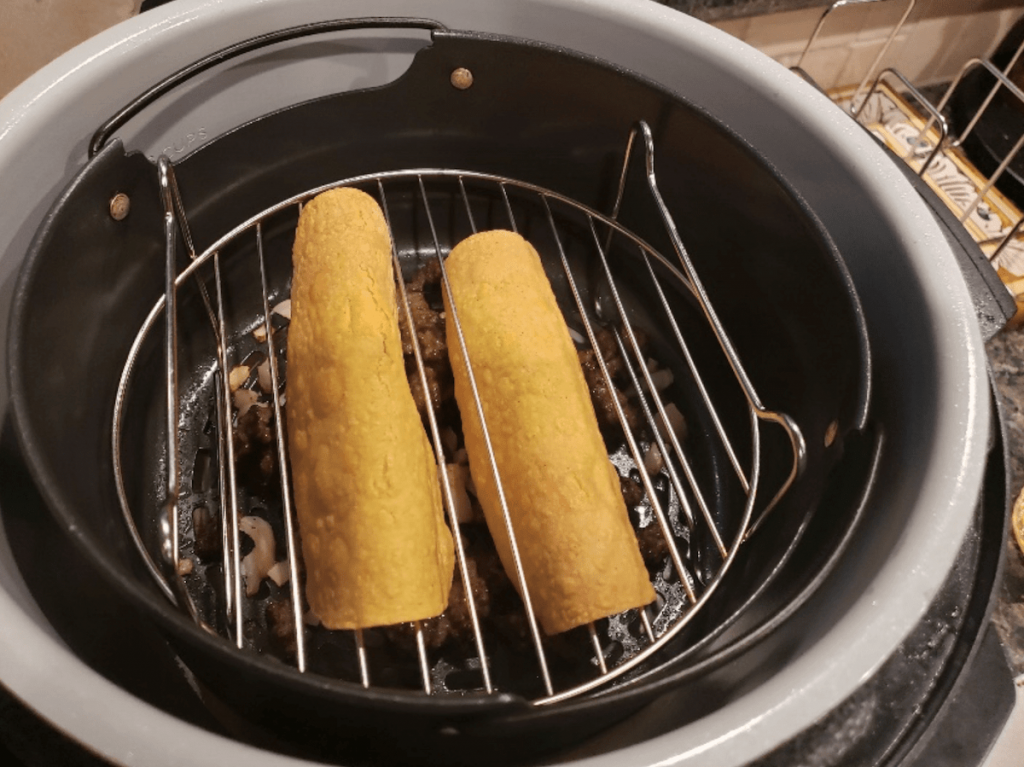 I closed the lid, set the unit on Air Crisp, left the suggested temperature at 380, and set it for 10 minutes. I checked it every two minutes, then five, and finally after 10 minutes I could tell the tortillas were crisp. I removed them to the plate, and the meat was also done! 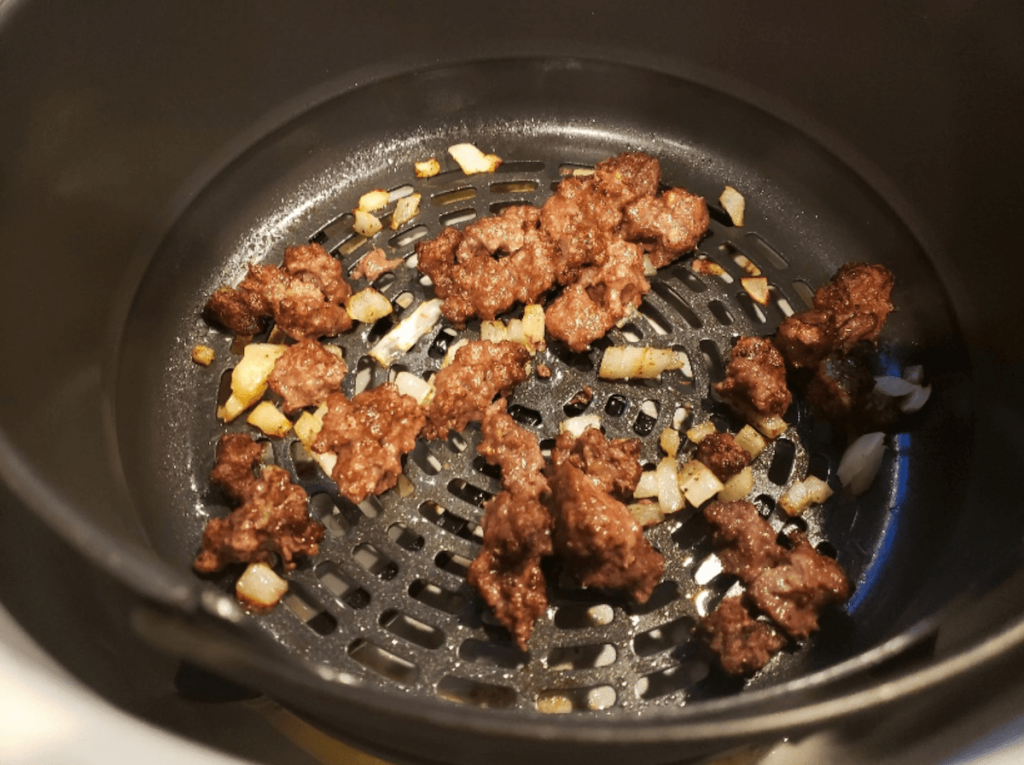 So now I filled the shells, added cheese, which proceeded to melt, topped with chopped lettuce and bits of cilantro, spooned on some red taco sauce, sprinkled with Parmesan (didn’t have any Mexican hard cheese on hand), and here we had nearly an instant taco dinner with no hot oil, and no clean-up except for the Pot, which is really easy. 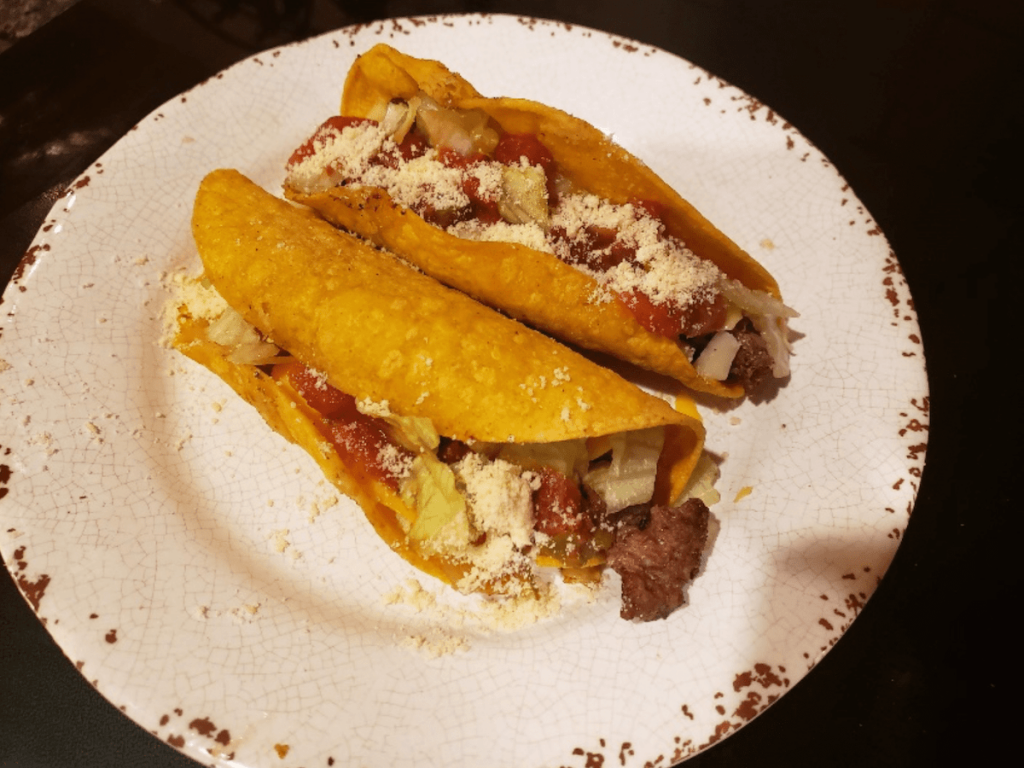 Wow. Now any night can be taco night the fast, easy way, even for only one or two people!