I decided to use the Ninja Foodi’s Air Crisp (air fryer) feature to brown a meatloaf that had cooked in it in the Pressure Cooker mode. I figured it would take much less time than baking in an oven, would drain itself of the fat, and would make cleanup much easier. I was right!

I made a smaller version of my meatloaf recipe so that it would fit in the Foodi:

Mix up the last eight ingredients in a bowl, add the chopped vegetables, and add to the meat mixture in a larger bowl. Remove your rings and massage the whole mess until it is uniformly mixed. Form it into a load shape to load into the Foodi.

I wanted the loaf to lie on something porous so that it would drain itself. In the photo, you’ll see that I used the Reversible Rack. But I didn’t want the load to be sitting on the wires, figuring that it would squeeze through and making it hard to extract the loaf after cooking. So I scrounged around and found a stainless steel plate from another appliance that worked fine. I could also have just covered the rack with a sheet of foil and poked holes in the foil as a drain.

Before placing the meatloaf in the Foodi, I had added a cup of water to the pot and had sprayed the rack and metal sheet with Pam to make cleanup easier later.

Here’s the meatloaf ready to cook: 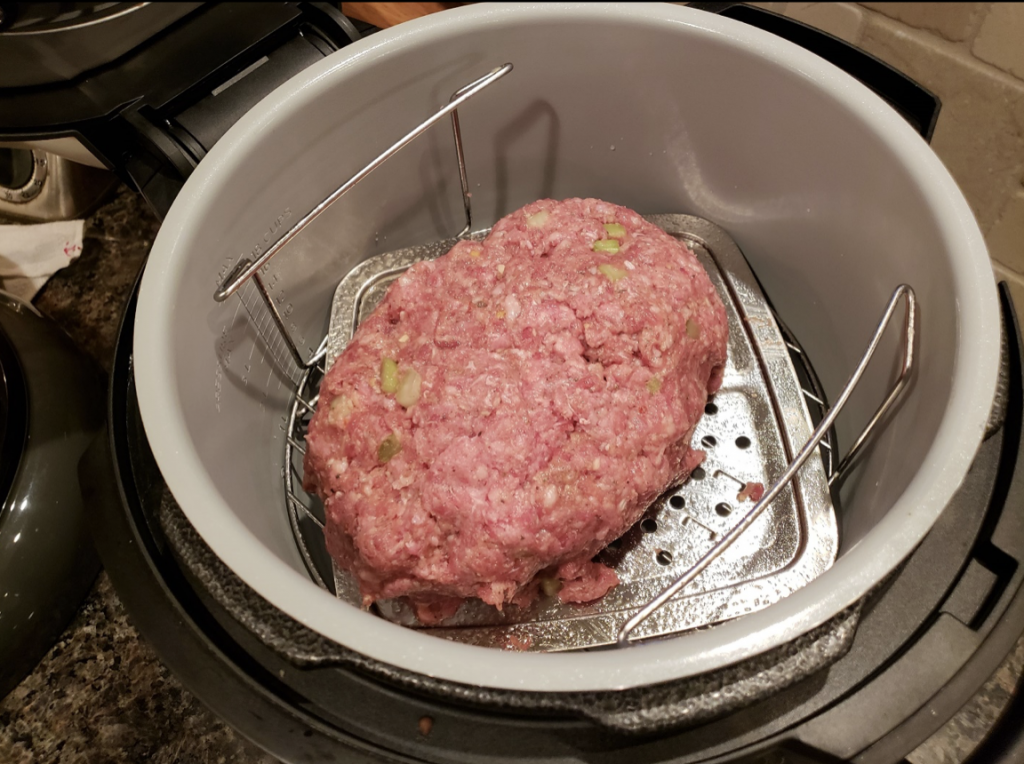 Now put on the Pressure Lid and set the mode to Pressure Cook and the timer to 15 minutes.
After 15 minutes, turn off the Foodi, quick release the pressure, and carefully open the top angling it away from your arm (the steam is hot!).
Now the meatloaf looks like this: 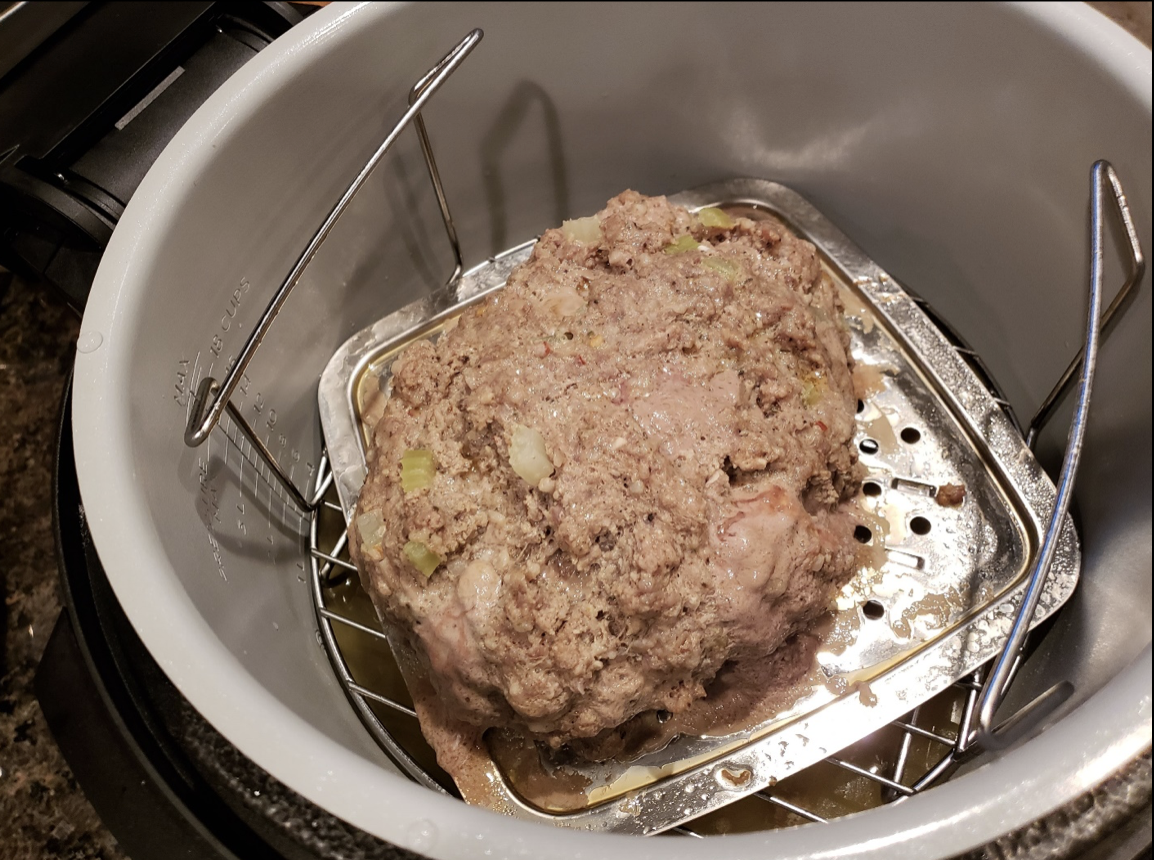 Smells great, but doesn’t look very appetizing… What you would expect from a pressure cooker, right?

But now close the Foodi’s Crisping Lid, and set it at 380 degrees for 10 minutes. You can check its progress now and then by opening the lid, if you want. It will resume when you close it again.

Now at the end of 10 minutes, this is what it looked like: 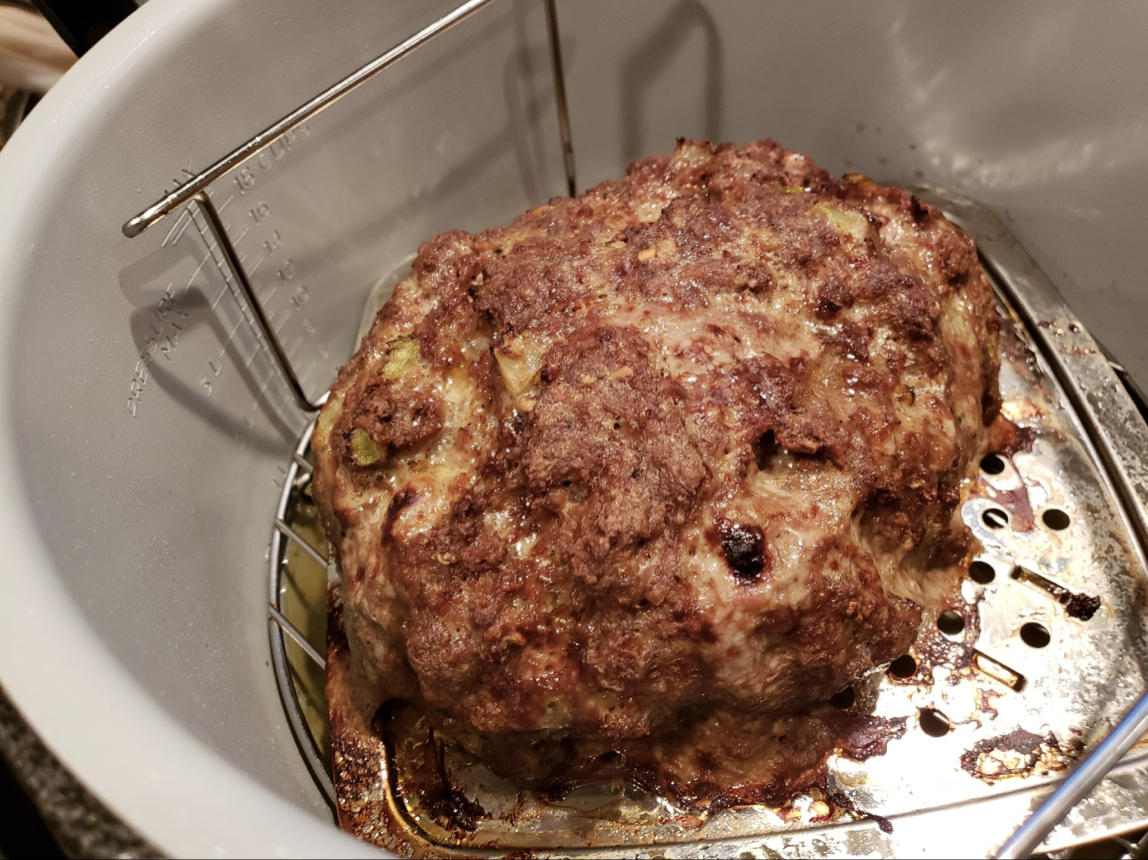 Now THAT’s more like it! You might want to dress the top with catsup or other topping before browning, but I didn’t in this case because I wanted to see the results “as is”.

I had baked two potatoes in the microwave for 5 minutes while the corn was cooking (next time I’ll try doing them together in the Foodi).

We weren’t ready to eat yet, so I put everything back in the pot to keep warm. 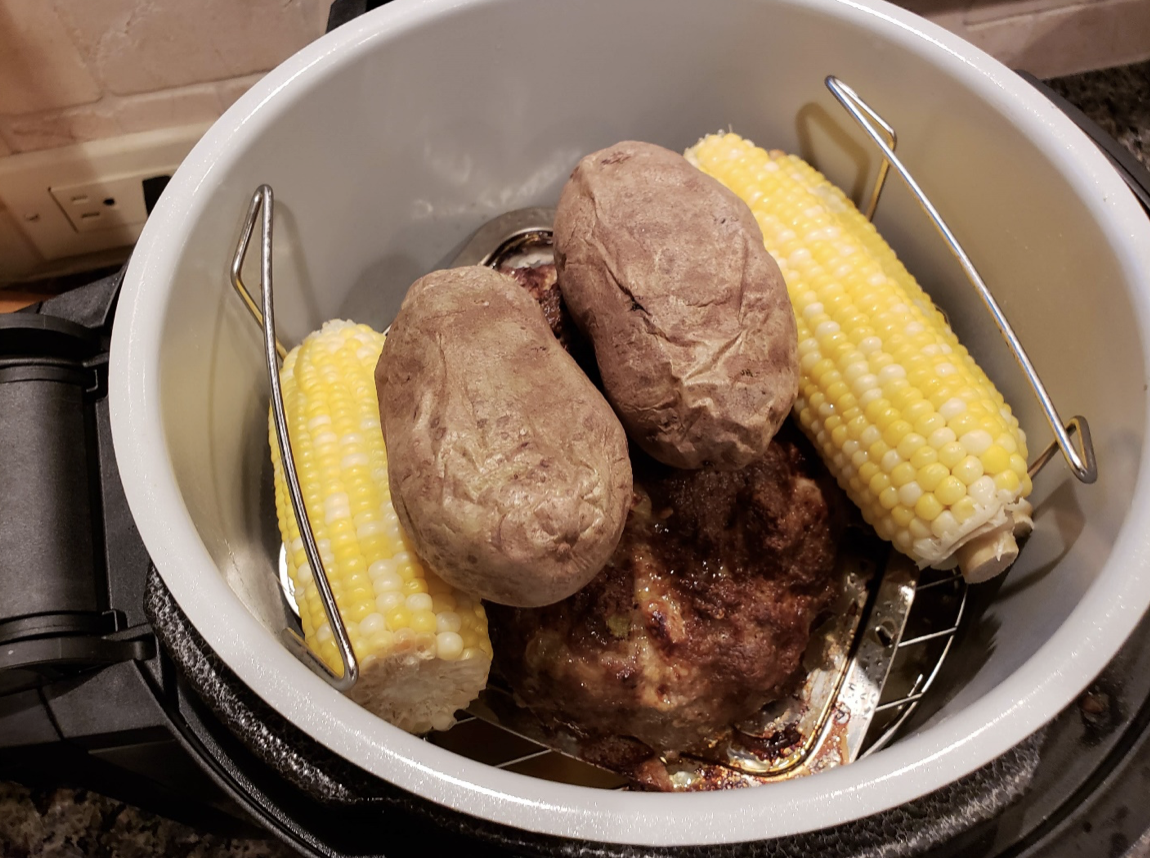 So in less than an hour I made a delicious meal (with leftover meatloaf) and cleanup took only about 10 minutes!